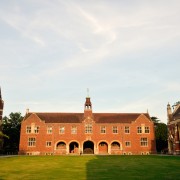 Every student likes breaks from school, that’s something we can probably all agree on. Still, our group was excited to go to Cambridge in the second week of our holiday (Pfingstferien). Unfortunately, the trip didn’t go as well as we’d hoped. We all got up early and met at the main station just to find out the train had some complications and was late.

After a long trip to Baden-Baden and some more waiting, we took a plane by Ryanair to London Stansted with a rather unpleasant landing. Thankfully, we were awaited by a coach and a teacher from The Leys. From then it only took about half an hour to arrive. The rest of the day was spent getting to know the school with no special plans.

On the second day we first attended a German lesson, where the students introduced us to the Leys, Cambridge and Great Britain in general. Afterwards we enjoyed two tours, one of the school and another one of Cambridge. That was the first day on which we really experienced the school life. We saw a lot of classrooms, got to know the important places and got an overview of the whole campus. In the afternoon we participated in our exchange partners’ lessons and learnt about their daily structure. Their days are incredibly structured, having a set prep time in the evening to study, set times for internet and set times for leaving the school ground. Bu the day was also used to grasp the differences of school life being so much more than just lessons. At the Leys, your life happens at school.

This morning we walked through a cow paddock to the river Cam, because our punting tour started there. For one hour we were chauffeured under bridges and trees, seeing the colleges we visited the day before from the river-side. After the guide told us some facts (at our teachers’ request) and we saw a swan with babies, it was our turn: about half of us tried punting more or less successfully, but luckily no one fell into the water. Like every Saturday the Leysians had their matches and we boys accompanied our exchange partners to  the cricket matches. Although two matches were played at the same time (the A-team and B-team) it was quite long and hot. But at the end (4 hours later!) it was very close for The Leys A-team and finally, the Leys won both games.

On Sunday we all had some free time to spend with our exchange partners and their families. Some of us went to a pool party with a nice barbecue at one of the English girl’s house. It was a great day!

After a funny trip with secret arrangements by Ms. Cica and Ms. Bönisch for Ilias’ birthday we arrived in Ely. At the Ely Cathedral we learned a lot about Ely’s history from a nice old man. At first we had a tasty cake at the Leys bought by the teachers and then we had scones with jam and cream at the headmaster’s house. We had a nice conversation with him and of course also some afternoon tea. In the evening we had an interesting treasure hunt all over the Leys Campus.

Equipped with lunchboxes we caught the train to King’s Cross station in London. We spend a lot of time in the very crowded Harry-Potter-Shop. Afterwards we were shown Trafalgar Square and Buckingham Palace. When we arrived at Regent Street, everybody had already found out what they wanted to do. I think everybody found something interesting and we had a good time in London. I personally recommend “Five Guys“ if you want to save money and enjoy well valued drinks with diverse and surprising flavours.

As we got up today, we all knew that this would be our last proper day at the Leys and we had to enjoy it. As usual, our exchange partners brought us to the Language Department, after the meeting at the Common Room, so we could meet the others and our teachers. In the first period we went to the art exhibition of all the Leys’ students. All of us were really impressed by their talent.

Afterwards we had some free time in Cambridge to do some final shopping. In the end we all bought lots of food even though we went to lunch with our exchanges afterwards. We also joined their final German lesson of the year, where we taught them Völkerball. After lunch we went to the Orchard Tea Garden together with the Leysians. It took us about one hour walking to get there. When we arrived at the Leys at approximately 4pm, we had some time to just hang out. In the evening some girls went to Cabaret at school. It was a very cool evening.

On Thursday we had to say goodbye to our exchange families and met at 8.30 a.m. at school. Mr Barley had prepared a quiz for us with questions about the United Kingdom and Cambridge. After that we drove to the airport London Stansted and had some free time until our plane took off.  After a few more complications with the train, we reached Stuttgart at 7.30 p.m. I think we can all agree that this was a lovely break from school and a great exchange! 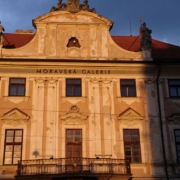 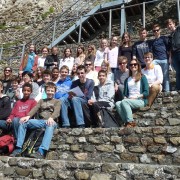 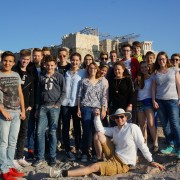 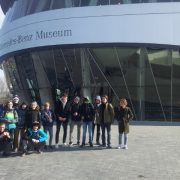 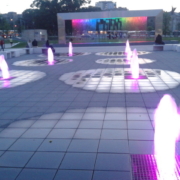